The Guyana Police Force has become aware of a statement made by Mr. Roy Beepat, Chairman of the Giftland Group, on the enforcement of the Covid 19 Regulations by the police in which he indicated that the ” Giftland Mall and its concessions are continously singled out for selective enforcement and police harassment “.

Cognisant of this statement the GPF categorically states that neither the Giftland Mall nor any other business entity is being targeted for selective enforcement and police harassment during the enforcement of the Covid 19 Regulations, which in all aspects, are being conducted in a professional and impartial manner by the police throughout the country; one that has nothing at all to do with racial prejudice, corruption or political favoritism as expressed by Roy Beepat.

In relation to business entities, the COVID-19 Restrictions allow for such places to be opened for business until 21:30 hrs daily. Consequently, police enforcement, in keeping with this directive, commences after 21:30 hrs.

In carrying out their COVID-19 Regulations duties on Saturday March 06, 2021, ranks of the GPF visited the Giftland Mall at about 22:10 hrs where it was observed that certain bars in the night spot area were still open for business and playing music. The Force is not aware of any unethical demands being made by any rank and which was refused, however three owners of bars that were still open were arrested and the bars closed down. They have been released on bail and are due for court on Tuesday next.

It is apt to note that owners of bars in the night spot area had been warned by the police during the previous night of Friday March 05, 2021, after they were found still being opened after the closing time of 21:30 hrs.

The GPF remains committed in the execution of its mandate of ensuring safety and security in the country in a professional, ethical and impartial manner. This is no different in dealing with the enforcement of the COVID-19 Regulations.

It should be noted that the GPF has enforced these regulations on several other establishments across the capital city and the country. We continue to appeal to citizens to adhere to the Covid-19 guidelines and to report errant establishments to our 911 hotline. 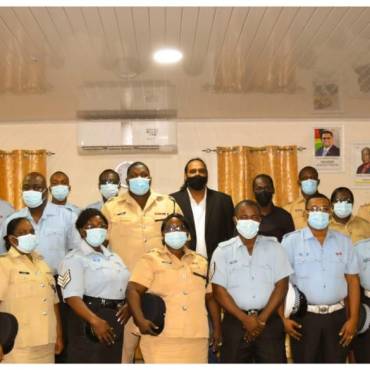